Thermal camera is being increasingly used a “Night Vision” camera and rightly so. Night Vision has much wider real world usage/application then “con-contact temperature measurement”. Thermal Cameras of Thermal sensors are capable of doing both. And as for developers point of view, using thermal camera as night vision device is much simpler, and faster to manufacture or calibrate too.

Temperature Measurement requires sharp image before temperature is computed. So, if a thermal imaging camera is used as “Night Vision Device”, It works just like normal camera, with either fake color palette or black and white images. It will still require ambient compensation to produce “good images”, but it still becomes much simpler to operate for the thermal imaging camera.

Normally, when a thermal imaging camera is used as “night vision device”, it can have lenses with long focal length. For example, it may have 50mm, 75mm, 100mm, 150mm, 200mm or even 300mm. With long focal length, it can see further and further. Its  generally accepted that, any thermal imaging camera using LWIR ( 8-14 Micron Wavelength) can “see” scene upto 15KM with suitable lens in un-cooled operation. Longer focal length lens could be very expensive. Cooled Thermal Imaging cameras can have longer distance, but are normally more expensive and takes longer to start.

Using thermal cameras as night vision devices have one main advantage, that is, its non-intrusive. Unlike traditional night vision devices, which normally uses image intensifiers and IR rays ( invisible to human eye, but visible to camera or IR detectors) to illuminate scene can be detected. As thermal imaging cameras use emitted IR from the scene objects to “see” scene, its impossible to detect if it is being monitored.

Another advantage is range. It can see longer than other traditional night vision devices by using lenses with long focal lens. This is one of the reasons why Thermal Cameras are being increasingly used as gun-sights.  With thermal camera based gun-sights, a shooter or a sniper can use his weapon both day and night.

Hunting ( illegal in India as well as many countries) weapons also use thermal imaging based night vision device which gives them night hunting capability. Also, forest officials use them to count wild animals during night time when nocturnal animals become active.

In future, we hope to see increasing usage of thermal camera as night vision device.

This site uses Akismet to reduce spam. Learn how your comment data is processed.

Sign up to receive updates and to hear what's going on in Thermal Imaging world!

We send only one email per day only when there is new article!
We never spam! 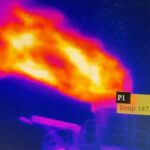 Welcome to Thermal Camera Blog! I will try to update this regularly with news, technical articles about thermal imaging world.